Find the Perfect Location for Your Business

Fidelis In The News

Collegiate Cleaners has had a presence in Houston’s Rice Village since 1947, providing dry cleaning, laundry and alterations to generations of Houstonians.

The dry cleaner’s owner, Greg Hazlewood—whose family has owned the shop since his grandfather bought it in 1979—has managed to keep it open but said he was caught off guard in March when the coronavirus pandemic struck in the Greater Houston area.

“I thought because we’re an essential business, it wouldn’t really affect us,” Hazlewood said. “But I didn’t really think about everybody going to work. That’s where a lot of our business comes from.”

While there have been some retail closures, data shows the overall picture is less bleak than expected.

That means that occupancy rates are relatively flat despite the area adding almost 1 million square feet in new retail inventory in the past year as new properties became available. 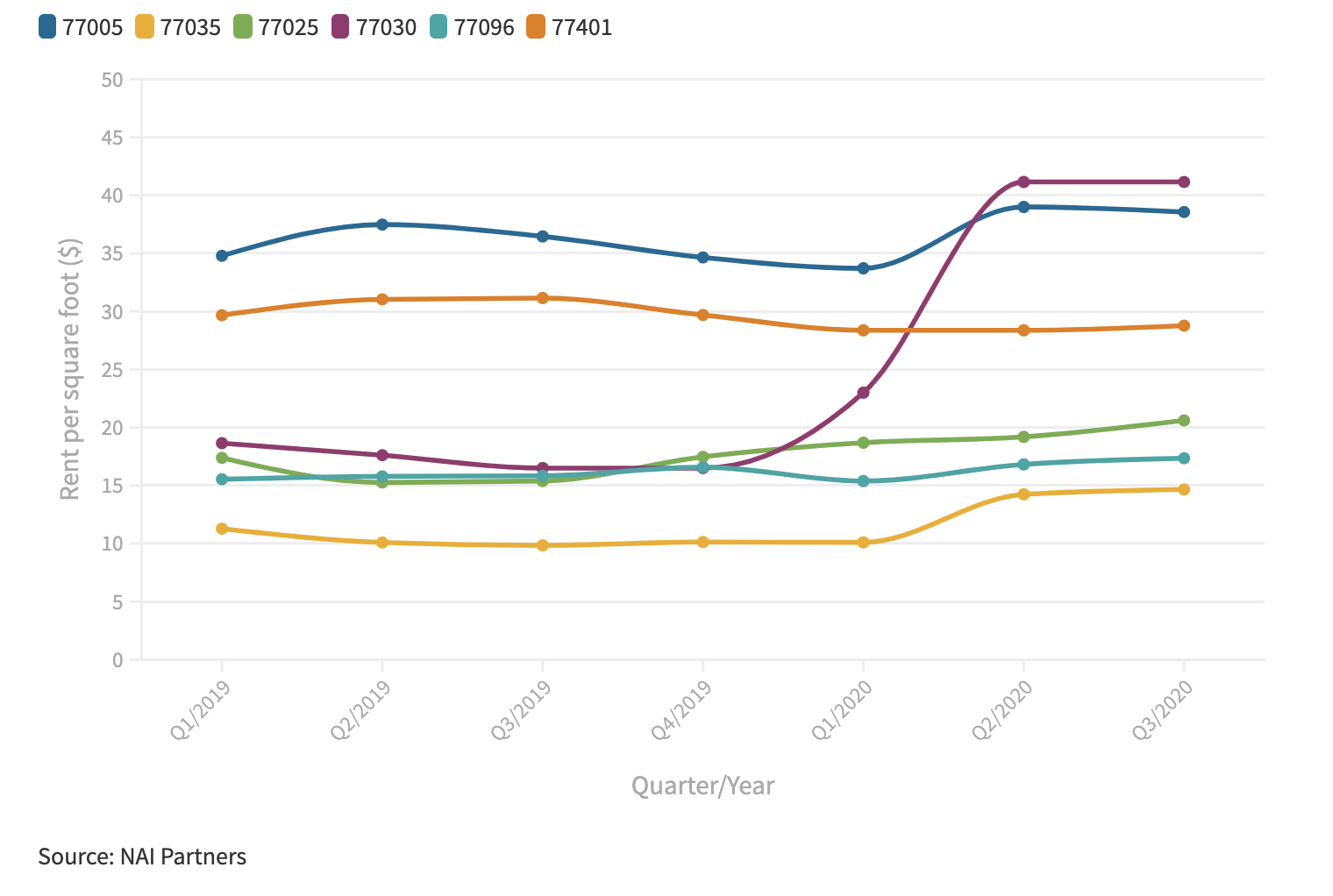 Drop, then recovery
Fidelis Realty Partners is a commercial real estate firm that owns, develops and manages mid- to large-scale shopping centers, including Meyerland Plaza. It is seeing fallout from the pandemic, said Lynn Davis, the firm’s co-founder and executive vice president of leasing and development.

Since the pandemic hit Houston, over the last several months, Meyerland Plaza has seen nine vacancies as a result of bankruptcies and companies choosing not to renew.

Despite that, occupancy has managed to stay above 90%, Davis said.

That figure lines up with occupancy rates in the Bellaire, Meyerland and West University Place areas in the data provided by NAI Partners, which includes information from all properties 5,000 square feet and larger.

In ZIP code 77096, where Meyerland Plaza is located, occupancy dipped to 94.3% in the third quarter of 2020, down from 96.8% a year prior—though still higher than anticipated.

For BPI Realty, which leases out retail space at a new shopping center on the corner of Bissonnet Street and Wakeforest Avenue, the pandemic hampered early leasing activity.

“I would absolutely say that we’ve had a good handful of deals that we were working on during the early part of this year that lost momentum, and several of them died,” said David Ferguson, a broker for BPI Realty, which handles leases at the shopping center.

The shopping center did not see its first lease signed until the middle of the year, and as a result, several 10,000-square-foot tenants did not materialize.

“Restaurants, in particular, are hit-or-miss,” Friedlander said. “If you’ve adapted to social media and curbside pickup, a lot of restaurants are doing just as well as they used to do. It just really depends on how well they’ve adapted to change this year.”

One of the most important keys for small, locally owned businesses, Ferguson said, has been rent deferrals from landlords.

Fidelis Realty adopted that strategy with its tenants, offering deferrals until 2021, Davis said.

“We worked with every one of the tenants that asked for help,” Davis said. “If they’re still struggling, we are absolutely wanting to help them, and to the extent we can, we will.”

More turnover?
Leasing activity has picked back up at Shops at Upper Kirby despite the slowdown, Ferguson said.

“We’re really excited about the activity and interest we’ve gotten over the last few months, and things are starting to progress and free up, and deals are starting to move a little bit quicker now,” Ferguson said.

Two restaurant groups have expressed interest in moving in, as has an urgent care clinic, and BPI Realty is in the pre-lease stage with a handful of other tenants.

Friedlander said he expects similar activity in his firm’s shopping center in Rice Village and anticipates its revitalization by the second half of 2021.

However, even with a vaccine, a rebound is not a certainty.

“I’m hoping that the coronavirus is almost over,” said Hazlewood, of Collegiate Cleaners. “I don’t know if my business will ever be the same because of these Zoom calls and conference calls.”

But one business’s closure could be another’s opportunity.

“There are some tenants that are just, you know, hanging by a thread because of COVID[-19],” Friedlander said. “So there could be more turnover. But when there is turnover, there is demand for new tenants that can afford the rent market there, whereas some of the tenants that have been there 20 years may not be able to.”

We Want to Hear From You